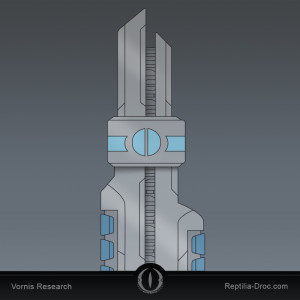 Sam is an energetic six year old boy, and son of Katherine Vesten. The boy has a healthy imagination, curious nature, and a talent for sneaking off in search of adventure. He is also an avid fan of a very popular animated series and toy line, based very loosely on the Reptilia Droc.

When Sam becomes convinced his favorite monsters are skulking around the abandoned warehouse across from his apartment complex, he looks for the first opportunity to investigate. Finally the evening came when Sam caught his napping and got his opportunity. 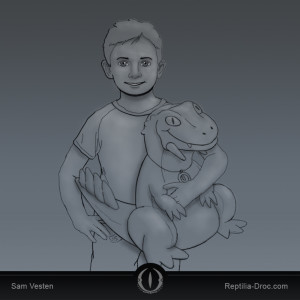 Katherine is single mother, living with her six year old son, Sam, in the city of Yuhanas Leh. Working long hours as a waitress in a bustling diner, Katherine can only afford a cramp apartment in one of the poorer sections of the city. She had hoped to at least get a unit facing the beautiful lights and architecture of downtown, but to her chagrin got a view of an abandoned warehouse across the street.

Hardships aside, Katherine had her son, who she loved and would do anything for. Although, Sam could be a handful, and keeping up with him after a long day busing table could be difficult. Especially once the boy got the idea in his head that there were monsters living in the rundown warehouse, despite her best efforts to assure him this was not the case.

Katherine’s quite life was rocked one night when she found herself dozing off early from the day’s work. A short time later, she was violently awaken by a thunderous sound, only to find that her son had snuck out of the house, and the city had suffered some sort of terrorist attack. Now Katherine must find her son, and the most likely place to search is the warehouse Sam believed to be filled with monsters. 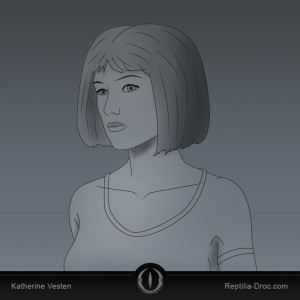 First Appearance: “Thrill of the Hunt”

The planet Amothwa is a poor, developing world on the edge of the Gal Zinge Corporation’s territory. It’s native population are the Amothie, a tall, thin, incectoid species.

The planet itself, is a dry and hot climate due to small oceans, and the system’s twin suns. Amothwa’s large landmasses are cover in rolling, grassy plains. Consisting of shoulder high, golden reeds, these plants are tough and require little water.

Jake Salnen worked for Destonie Corporation as part of their world harvesting operations in Outer Territory. He was recently re-assigned to a planet surveying team, and tasked with testing for mineral deposits. Jake considered the transfer to be a plus, while there were less conveniences, there was also less risk of accidents involving the massive world harvesting machines.

When Jake’s team was sent to evaluate the resources of a planet called Arris, he expected another easy tour. The situation quickly changed when an explosion left Jake alone and pinned under a pile of rumble.

Gree Ra’desh, was a Yah’Weian missionary that lived two hundred years before the formation of the Conglomerate States. This turbulent era, known as the Age of Turmoil, saw the decline of interstellar trade and multiple wars between rival worlds, which lead to a great deal of suffering throughout the galaxy.

Gree Ra’desh was well known and praised for his work helping the sick and poor as he traveled between galactic hotspots, spreading the message of Yah’Wei.

The missionary was killed while helping Dorsyan refugees at camp bombed Ziefian rebels. Soon after his death, the Yah’Weian elders declared Gree Ra’desh a saint, who would go on to become a prominent figure in the religion.

In the Conglomerate era, the Gree Ra’desh is still revered by the faithful, but frequently used in vain by less religious beings. 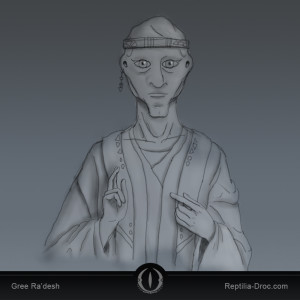 Vanta rats are an evasive species which has spread across the galaxy by  stowing away on cargo ships transporting goods from planet to planet. These hardy pests can quickly adapt to a variety of harsh environments, and can resist most poisons used against them. They have sharp teeth and claws, and with sufficient time and numbers, can chew their way through just about anything.

The galaxy is starting to unite once more, taking the Wei’Quin’s ideal of developing the land and its resources in the name of profit and progress, twelve titan corporations stepped forward and essentially bought two thirds of the Nexis Galaxy. Privatizing the local governments and public services, replacing politicians with regional directors. Planets sold their independence in exchange for security, food, and guaranteed employment for all citizens. The twelve galactic corporations then established a loose knit truce between one another and became known as the Conglomerate States.

A thousand year period between the fall of the Wei’Quin Empire and rise of the Conglomerate States.

Technology, interstellar trade and diplomatic relations between worlds were massively setback by the Great War and the loss of a central government.

New species all around the galaxy are reaching “Hyperdrive” level technology. There are little to no signs left of the Ancient races. The concept has been largely dismissed as myth or been absorbed into local religious doctrine as angels and deities.
In the Core of the galaxy, a central government called the Wei’Quin Empire has been formed. It has a manifesto to unite all the worlds of the Nexis under one rule, one culture, and one language. It proceeds to absorb the surrounding systems through diplomacies and generosity at first, and war if the people resists.