The Dominator is five mile long warship making up the spear front of the Reptilia Droc fleet. It’s equiped with over a hundred heavy plasma turrets spread over the length of the ship, including it’s eight spires. This allows the Dominator fire on multiple targets in any direction simultaneously. It’s protected by powerful shields and thick armor plating made from a super strong alloy of metals unique to Droc Territoy.

All these traits make the Dominator a formidable warship, but it’s greatest advantage is the Solaris canon. A wave of charged particles that fires from the blue crystal tip of the vessel. The Solaris particle are able to pass through a ship’s shields, and upon hitting the solid matter of a hull, causes it’s atoms to fission and explode. Instantly destroying its target. It takes five minutes for a Dominator’s reactor to recharge the Solaris canon’s battery after discharge. However a even a small battalion of Dominator firing together in a tactical line can devastate an enemy fleet in moments.

The Solaris Canon can be focused into a small burst to cause maximum damage to a single target at long distance, or fire in a short-range wave to savage multiple targets. While Droc warrior caste rule the ground with their strength and skill, they rule the skies with the Dominator. 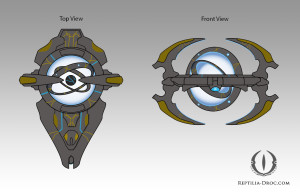 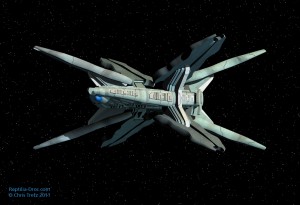