Set’Cul works as a security officer for the Gal Zinge corporation. He has been stationed at the mining installation on Sakora. Set’Cul was assigned as an escort for Melean and Bradic on their research missions into Sakora’s wilderness. Security details became necessary for personnel working outside of the mining compound after a series of disappearances suffered by the surveying crew.

Set’Cul is also on the watch for a reported species of strange glowing serpents which swim through the air. The creatures remind Set’Cul of spirits from an annceient legend of his people, and believes them to be warning of something more dangerous to come.
– 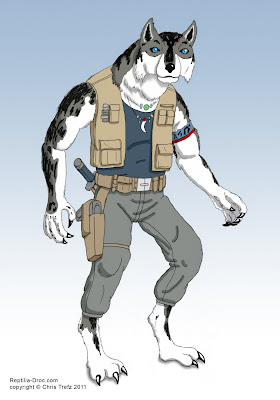 Species:
Set’Cul is a Lycral, an Alpha species from Bassorian system. As an Alpha he possess preternatural strength, speed and agility. As well as accelerated healing, and predatory senses.
Lycrals have a deep spiritual connection to their world and are seldom fond in other parts of the galaxy. While being a member of the Conglomerates States, they reject most of it’s corporatized culture for their ancestral ways and beliefs. Even as Set’Cul left his world to find work among the Outer Rim, he holds on to his people’s heritage as well as a few superstitions.