First Appearance: “Thrill of the Hunt”

The planet Amothwa is a poor, developing world on the edge of the Gal Zinge Corporation’s territory. It’s native population are the Amothie, a tall, thin, incectoid species.

The planet itself, is a dry and hot climate due to small oceans, and the system’s twin suns. Amothwa’s large landmasses are cover in rolling, grassy plains. Consisting of shoulder high, golden reeds, these plants are tough and require little water.

Located in the Outer Territories, Arris is the fourth planet in its system. It is an uninhabited world covered predominantly swamp and marsh land. The planet was in the process of being surveyed by the Destonnie Corporation, in hopes of replenishing their dwindling resources. However, the operation was put on hold after the surveying team suffered severe casualties, in an incident involving the Reptilia Droc.

Star map showing the territorial break down of the Nexis Galaxy. 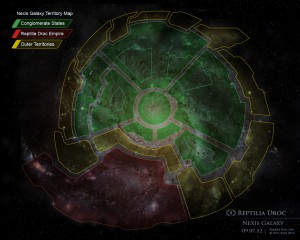 The green areas are divided among the 12 mega-firms making up the Conglomerate States. Beyond that are the yellow zones, unsettled and lawless regions of the Outer Territories. While in the southern quadrant of the galaxy, in a region known as the Dragon’s Tail, is the vast and fortified territory of the Reptilia Droc.

The Outer Territories are made up of the unsettled regions of space surrounding the Conglomerate State. Free of Conglomerate law, it has long been a haven for pursued criminal and political radicals who the Corporations wish silence. But for many it’s considered a haven of last resort, even a death sentence.

Outside of Corporate military enforcement, the region is host to pirates, outlaws, and militias. The Reptilia Droc, who’s territory lies on the edge of the Southern quadrant, frequently patrol sections of this outlying region with with massive warships. It’s unknown who or what they are searching for. Recently reports have have come in of an unidentified insect race launching raids against convoys and settlements. 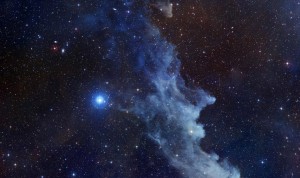 Also living among the these dangerous elements are colonies of humans who choose to remain there while the great human migration passed through on their way to the Conglomerate States.

But the biggest change in the Outer Territories has been the resource depleted Corporations turning their gaze towards the regions largely untapped worlds. The Corporations have been sending out hundreds of surveying teams, and gearing up for colonies and trade roots.

But all of this activity has not gone unnoticed by the regions inhabitants, and even with the heavy military presence assigned to protect Corporate interests can  become out matched.

Mu is a classification of planets with atmospheres are composed of nitrogen and oxygen and have an abundance of liquid water necessary for carbon-based life to exist. A planet with moderate (as necessary for liquid water) temperatures, more technically speaking: the thermal surface requirements necessary to support complex (multicellular) life.

Stage 1
Life has evolved and can range from simple microbes to more advanced plant and animal life. These worlds however do not contain any native sentient life-forms. These worlds are typically found in the Outer Territories and are prime canidates for colonization by the corporations with no issues of previous ownership to contend with.

Stage 2
Extensive plant and animal life has been since established, and supports one or more sentient species in early development. Sentient development can range from stone age civilizations to post industrial civilizations. Earth in it’s prime was is a textbook example of a Mu Clas world.

Stage 4
A planet entering its final life cycle due to war, environmental destruction, or astronomical events such as a dying star or meteor impact. Earth entered stage 4 when humans were forced to leave their planet and migrate across space, eventually settling in the Nexis galaxy. Records were lost on exact cause of Earth entering stage 4 collapse.

Being a planet in Phase 1 stage of development, Sardonna has no native sentient life. However the planet was colonized by the Cioypax corporation. The firm established a large naval post there to protect their investments spread across the Outer Territories.

A distress signal sent from this outpost attracted the attention to Captain Bessourn and the crew of the Pathfinder, in their search for Reptilia Droc technology. 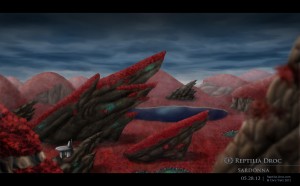