Ellie Nurrier, first mate of the Pathfinder, a freelance salvaging freighter operating along the Outer Territories.

Ellie is a talented pilot, and an expert fighter. In her earlier days she served in the military of the Tydorenn Corporation as a pilot, flying troop transports into battle zones. But she real  goal was to join the men down on the field. She later resigned, frustrated that woman were banned from ground combat, despite having completed and excelled at all of the necessary training. 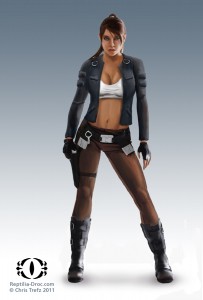 This has left her quick to throw herself fully into any challenge, even to the point of being reckless. While Ellie is fully capable of defending herself against pirates, and the other predators of the Outer Territories. She and the rest of the crew of the Pathfinder will find themselves unprepared for an encounter with the feared Reptilia Droc.

Derrich Lorn built space freighters on a Corporate shipyard, until selling company equipment on the side landed him in prison. Newly released and in need of work, Derrich finds himself on a freelance salvaging crew operating in the dangerous Outer Territories. Their mission, to salvage Reptilia Droc technology from recent battle with the Corpoarations. A mission that could leave them set for life. If they survive it.

The Pathfinder is owned and operated by Captain Dren Bessourn, for his freelance salvage operation in the Outer Territories. The rest of his crew consists of pilot and first mate Ellie Nurrier, Fren the medic, Karris on security, Sauln and new comer Derric Lorne on acting as engineers.

The Pathfinder its self is approximately 150 feet long, though most of its size is dedicated to cargo room and engine power. Leaving sparse room for living space, and a external bridge resembling a shuttle cockpit. 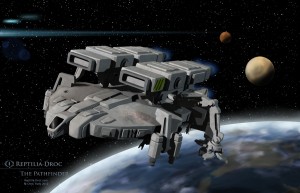 Other features include four industrial strength tractor beams on the belly of the ship, and a pair of magnetic clamps on robotic arms. Eight vertical lift thrusters spread along the sides of the ships, and two massive Towing engines connected to rotating arms, allowing targeted power. These features combine to give the pathfinder the power to tow much larger vessels in space and or from a planet’s gravity.

The ship was designed by Dol’barri shipyards, an insect-like race working under the Coiypax corporation. This background brought an unusual beetle-like influence to Pathfinder’s design.

“Next was Fren, the paramedic. The dorthec was tall, thin and extremely pale, even by the standards of his race. He was put on permanent medical leave, suffering from severe depression and paranoia. My new bunk mate, Fren incessantly muttered to himself. He frequently accused me of stealing his possessions. One time, going as far as to threaten me with a laser scalpel.”
– Derric Lorne, Reptilia Droc: Scavenger
–

Dren Bessourn, captain of freelance salvaging freighter, the Pathfinder.
Bessourn grew up in the Outer Territories beyond the Conglomerate States, where he learned to pilot star ships and handle dangerous situations. Later in his life he tried working for the Corporations, but was too much of a free spirit to live under their strict rules and protocols. 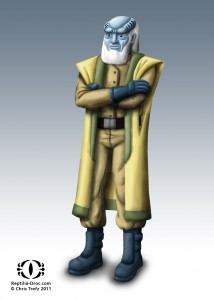 Taking out loans for some dangerous people, he acquired his own ships and gathered a misfit crew in an attempt to start a new life.  After a few jobs went wrong, Bessourn fell behind on his payments to the mob and had to go into exile in the Outer Territories. Bessourn was seeking away to square his debt once and for all when he was contacted by the Ponsauri Corporation for a dangerous but well paying job involving the Reptilia Droc.

Sauln, the wise cracking, pill popping engineer of the Pathfinder.

“A stout, Pethelisc with a long neck and camel-like face. He certainly knew his stuff… when he was sober. Sauln was fired from the corporations for his part time job as drug dealer. They’re usually pretty soft on drugs, but Sauln wasn’t paying his dues to the supervisor. He also developed a habit of sampling his own product while on duty.
My first day, he fixed me a drink as a friendly welcome aboard gesture. Great, except it was laced with some kind a hallucinogen. For the next few hours I had to endure melting walls, and the crew’s faces having turned into tentacles.”

Karris is head of security on board the freelance salvaging freighter, the Pathfinder. As an Alpha Karris has superhuman strength, speed, animal senses, and healing abilities.

Despite his fearsome appearance, Karris is loyal to his shipmates, easy going and loves to joke around. Karris rarely shows his temper, but when he does it can be explosive, which has led him into trouble with the law. 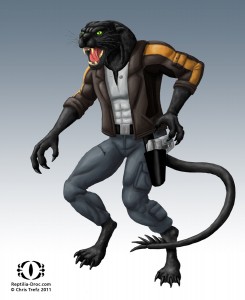