The Day Jaws Met His Match

Sharks and crocodiles are predators in their own right, but who would win a fight if the two creatures came up against each other?

The answer is a crocodile – at least if this photo is anything to go by.

Andrew Paice, 43, managed to capture the moment this 5.5 metre crocodile named Brutus latched onto a bull shark in the Northern Territory before it swam off into the mangroves to devour its prey. 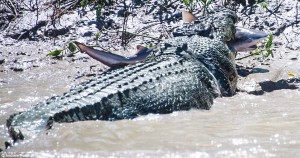 Reminds me of B-movie Epic “Mega Shark vs Crocosaurus”, where a Kaiju-sized megalodon squares off against and equally enormous prehistoric crocodile.