The galaxy is starting to unite once more, taking the Wei’Quin’s ideal of developing the land and its resources in the name of profit and progress, twelve titan corporations stepped forward and essentially bought two thirds of the Nexis Galaxy. Privatizing the local governments and public services, replacing politicians with regional directors. Planets sold their independence in exchange for security, food, and guaranteed employment for all citizens. The twelve galactic corporations then established a loose knit truce between one another and became known as the Conglomerate States. 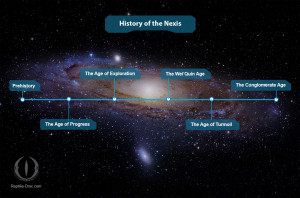